Budgies Uncaged, the latest work in my Flying Colours series, has been selected as a finalist in the Australasian Quilt Convention 2013 challenge – FREE  that will be on exhibition in Melbourne 18-21 April before going on tour.

Although the conditions of entry did not expressly prohibit works that had previously been exhibited or published, I deliberately refrained from sharing photos along the way apart from this scrap tease on Australia Day: 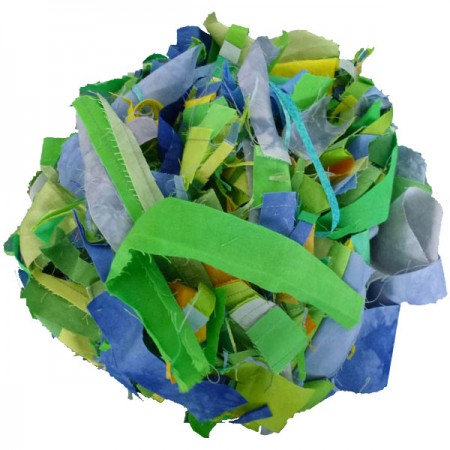 This is because I like keep an element of surprise for an exhibition debut; it makes it more special somehow.  Also, I wanted to keep my options open in case the work was not selected as finalist.  However, I did keep a record of my time and lots of work-in-progress photos.  So today I will review the process of creating this work.

When the organisers of the Australasian Quilt Convention announced that the theme for the 2013 challenge is FREE and all challenge works must be 125x125cm, I was excited.  The theme and size was perfectly aligned with the body of work that I am endeavouring to create.

My Flying Colours series is inspired by the colour and movement of Australian parrots. In late 2012, astonishing images of a massive swarm of budgies in Central Australia appeared online.  A budgie swarm is  evocatively named as a “murmuration” and I knew I wanted my textile work to capture a riot of colour.

I made some rough concept designs using a photo editing program and cropped details of my earlier work Lorikeet Circus: 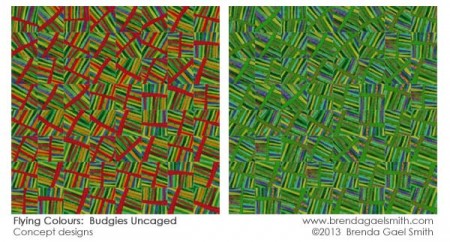 Next I made some sample blocks and auditioned green and blue central strips to denote the body of the budgie.   Although the blue created a higher contrast, I decided to proceed with a variety of greens in keeping with the true colours of the budgies:

I also briefly experimented with a kind of  “on point” setting before reverting to a square layout.  (I may return to other angles and orientations in future works.) 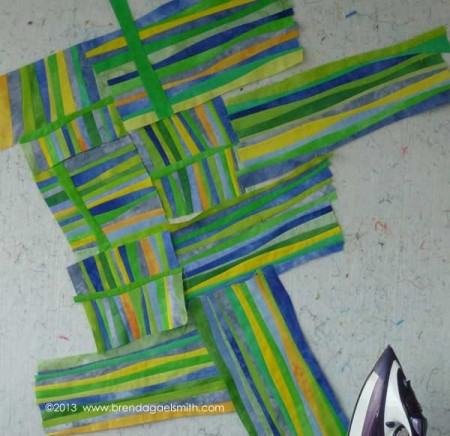 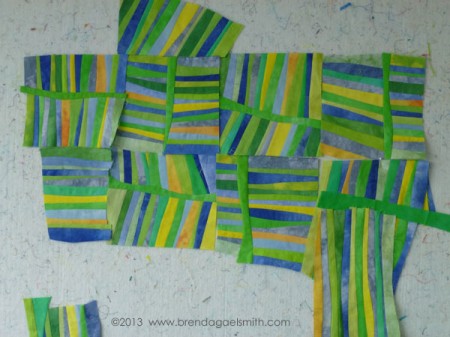 Once I was happy with the general approach, I created my own “murmuration” of budgie blocks: 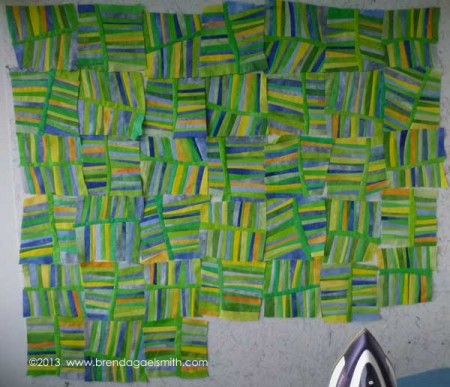 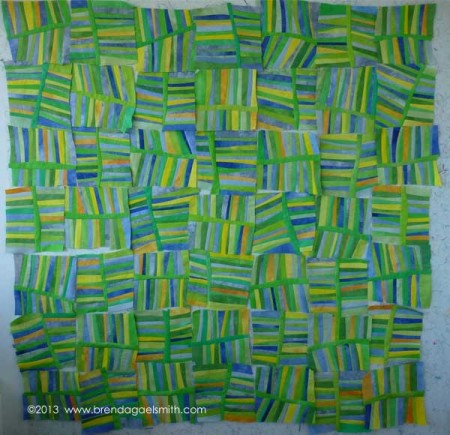 One of the challenges of making a work to a prescribed size, in this case 125x125cm (49x49in), is trying to factor in how much the work will contract with quilting.  I made my outside blocks (the ones marked with a dot) slightly bigger so that I had some wriggle room. 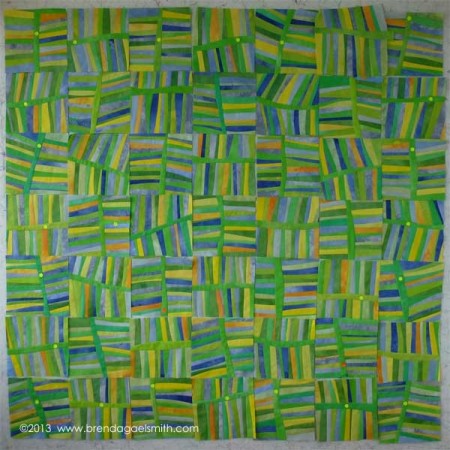 According to my records, using Harvest time keeping software that comes with a two project/unlimited subtasks “FREE FOREVER Plan”, it took me 40 hours to complete the top layer and another 80-100 hours to quilt and finish the work. This doesn’t include the evening hours in front of TV burying my quilting threads.

I quilted each strip of colour in a matching thread with intense, linear stitching.  Up-turn-down, turn-up-turn, down-turn-up, turn down turn – repeat as required. 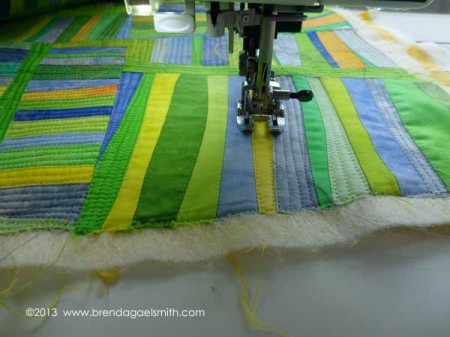 You do get into a rhythm but, with short strips, and changing out colours, it wasn’t always soothing.  There were times that I would have preferred to be at the beach but I did appreciate the wider working space on my new machine. 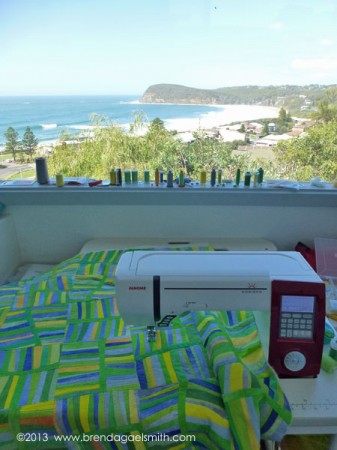 As I got further along, the work got heavier and heavier.  From recollection, it weighed over 1.6kg (3 1/2lb).  That’s the size of a small baby! 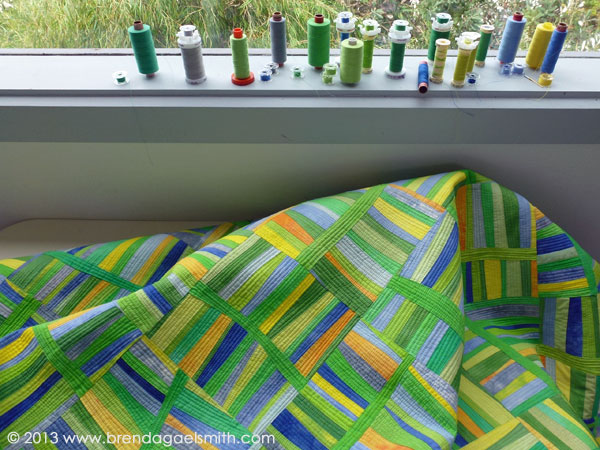 But I think the final effect is worth it! 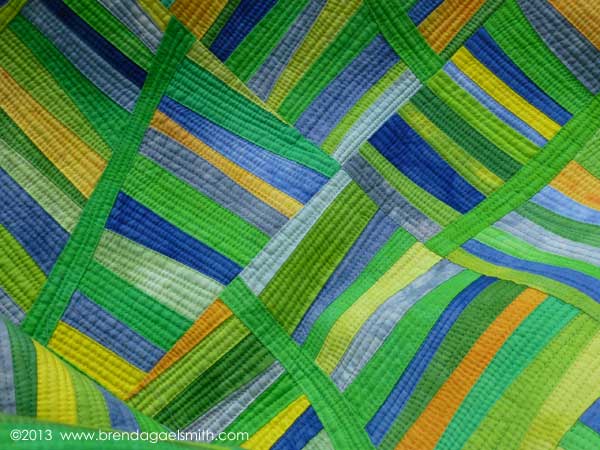 Of course, quilting is not the end of the process.  I then had to square up the work to the prescribed size.  As it turned out, I didn’t need the extra allowance around the outside but it was easy to trim off.  I then made a combined velcro-hanging sleeve and a label in accordance with my Printed Quilt Label Tutorial: 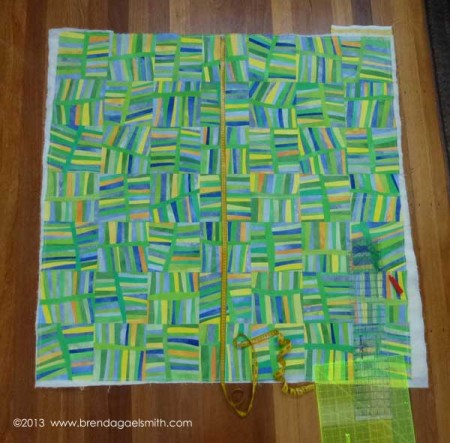 So, if you thought my blog was quiet in January, this explains why! 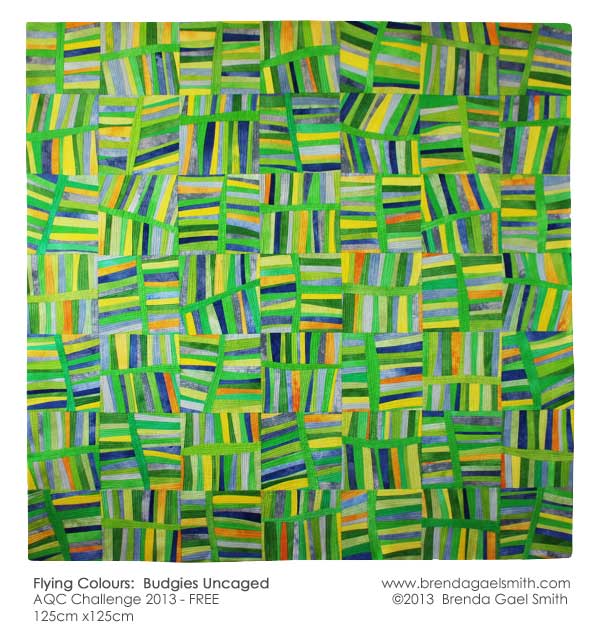 Flying Colours: Budgies Uncaged: In some parts of the world, budgies are caged as family pets. In Central Australia, tens of thousands of budgies fly free in murmurations creating a spectacle as they swoop through the air. 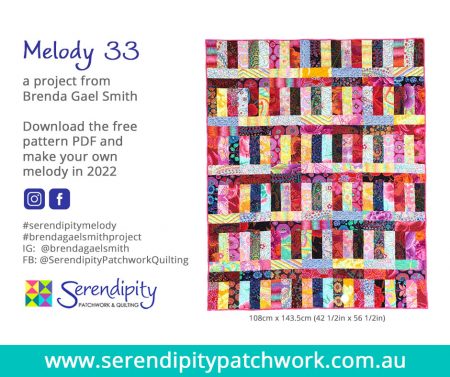 If you are travelling in Northland Aotearoa (New Z

Happiness is when a quilt, that has been sitting i